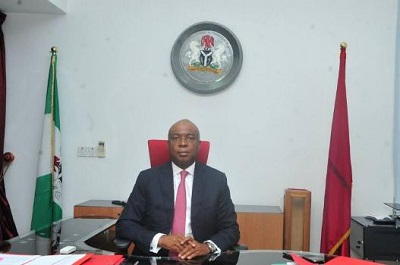 The Senate President, Dr. Bukola Saraki, has denied reports on Wednesday that the Code of Conduct Bureau has prepared a 13-count corruption charge against him for offences ranging from anticipatory declaration of assets to making false declaration of assets in forms he filed before the bureau while he was governor of Kwara state.
It was also reported that the Senate president would be arraigned before the Code of Conduct Tribunal before the end of the week.
However, in a statement by his media office, Saraki said he was yet to be served the court papers even as he clarified that the allegations contained in the charge sheet are not only false, but another futile attempt to smear his character and bring the Office of the Senate president to disrepute.
Read the full statement issued by Dr. Bukola Saraki’s Media Office:
The attention of Dr. Bukola Saraki, President of the Senate, has been drawn to a charge sheet being widely circulated on the online media, upon which he is expected to be tried at the Code of Conduct Tribunal (CCT).
It should be noted that at the time of writing this statement (10.00am on September 16, 2015), Dr. Saraki has not been served the court process.
However, we recognise that as a public officer, he owes members of the public explanation on the allegations contained in the charge sheet.
We therefore state as follows:

1. That all the claims contained in the charge sheet are false, incorrect and untrue.

2. That Dr. Saraki has consistently declared his assets as required by law at every point before resuming any political office and that of 2015 is not an exception. It is surprising that the alleged charges is now referring his asset declaration made in 2003 while in office as Governor of Kwara State to formulate their charges. They therefore ignored the recent declaration for which they last week issued an acknowledgement.

3. That we believe that the Code of Conduct Bureau following their processes in which after a declaration is submitted to the bureau they carried out verification of the assets and ascertained the claims made, should not wait till 12 years later to be pointing out an alleged inconsistencies in a document submitted to it in 2003. This same Dr. Saraki submitted asset declaration form in 2007, 2011 and 2015. It is unexplainable that the case in question is now based on the 2003 declaration.

4. This is why we are of the opinion that present effort is a desperate move initiated due to external influence and interference.

5. It should also be noted that contrary to the procedure indicated in the law setting up the CCB, the bureau never wrote to Dr. Saraki to complain of any inconsistency in his asset declaration forms.

6. It should also be noted that Dr. Saraki as Governor of Kwara State never operated a foreign account.

7. That some of the issues contained in the charge sheet are subjects of earlier decided and on-going Court cases. We therefore believe those behind filing of these charges are engaging in forum-shopping.

8. It should be noted that we do not know on whose authority these charges are filed when the Code of Conduct Bureau and Tribunal Act clearly indicate that any prosecution must be authorised by an Attorney General and we know the nation last had an AG in May 2015. This is another clear indication that the CCT is acting under influence from outside its domain and therefore ready to bend the rules to achieve this obnoxious objective

9. We therefore conclude that this is not an anti-corruption driven case and cannot be part of the moves aimed at fighting corruption. It is simply a pure malicious and politically motivated prosecution aimed at undermining the person and office of the Senate President.

10. That those behind this plot will definitely meet Dr. Saraki in court as this case which is based on outright fabrication and mischief will not and cannot stand the test of justice.

11. It should be noted that throughout his career as a public official democratically elected to high public service, Dr Saraki has always held himself, to global standards of transparency and accountability, to a far higher standard of diligence, disclosure, and compliance, than required or even requested by Nigeria’s Code of Conduct protocols. Thus, Dr Saraki has always, lawfully and accountably, declared his assets, both directly owned, and in which he may derive any historical and on-going degree of beneficial interest.

12. In view of the above, Senator Saraki hereby affirms his belief in the justice system and that when the proposed case comes to the tribunal, he will diligently state his case. He is also ready to co-operate with the Tribunal and other lawful government agencies in the bid to genuinely fight corruption and eliminate impunity in our public affairs.

13. We also note that anytime you try to fight corruption or insist that the right thing should be done, the system will always come after you. This is another case of desperation to fight Dr. Saraki because of his recent stance on national issues.