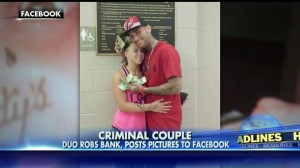 An Ohio couple was arrested this week for allegedly robbing an Ohio bank after posting photos to Facebook showing them posing with stacks of cash, according to police. John Mogan, 28, and Ashley Duboe, 24, are charged with the August 24 robbery of Savings Bank in Ashville, a town 20 miles south of Columbus.

Investigators allege that Mogan, a convicted felon who was just released from prison, walked into the bank and gave a note demanding money to a teller, who then handed over cash. They allege that prior to driving Mogan to the Ashville bank, Duboe applied makeup to his face and neck to cover numerous tattoos.

Once the images were uploaded on to Facebook several days after the robbery, Mogan and Duboe were tracked down and arrested. They have each been charged with robbery and theft, and are locked up in lieu of $250,000 bond in the Pickaway County jail.