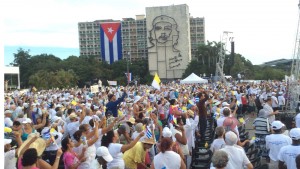 Pope Francis led tens of thousands of Cubans in a mass in Havana’s Revolution Square, the political heart of Cuba where the Communist government stages its biggest rallies. Aljazeera was on site:

Following the mass attended by an estimated 300,000 people, the leader of the Catholic Church, Latin America’s first pope, met on Sunday with Cuban revolutionary leader Fidel Castro, and discussed religion and world affairs at the home of the 89-year-old retired president. Vatican spokesman Father Federico Lombardi said the meeting lasted about 40 minutes and was “very familiar, fraternal and friendly”.

Ahead of the mass on Sunday, the pope greeted the massive crowds of fans and faithful as he arrived in his popemobile. The Argentine pontiff leaned out from his white open-air vehicle to grasp the hands of festive onlookers and wave to the crowds gathered under the cloudy sky.

Al Jazeera’s Lucia Newman, reporting from Havana, said three dissidents were wrestled to the ground by security personnel, after they threw leaflets and attempted to approach the pope. At least one of them reportedly managed to speak briefly to the Catholic leader.