A 65-year-old landlord has been arrested in Otta, Ogun state, for allegedly setting fire to and killing the three-year-old son of his tenant. 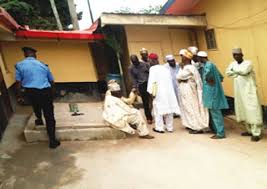 Otta police arrested Joseph Olaleye, who allegedly threw an ignited kerosene stove at the boy, who was a son to his tenant Olalekan Razak, Vanguard reports.

The police public relations officer in the state , Muyiwa Adejobi, in a statement said the suspect who lived in Olowosatide, Owode Ijako Ota in Ado Odo Otta local government area of the state, committed the crime on Monday around 1pm. According to Adejobi, the ignited stove caused severe injuries to the victim, who was rushed to a hospital in Otta where he was later confirmed dead.

The commissioner of police in Ogun state, CP Abdulmajid Ali, who described the incident as unfortunate, has directed that the suspect be charged to court after investigation without delay.

The commissioner sympathised with the family of the young boy and assured them, as well as the people of Ogun state, of justice in the matter.

Only recently, Dominic Udo, a tenant who reportedly owed his blind landlord rent for three years and six months, set the house ablaze, in the Ajegunle area of Lagos state.