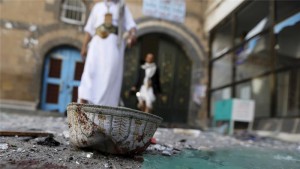 Suicide bombers have struck a mosque in Yemen’s capital in an attack targeting Shia worshippers that killed at least 25 people and wounded dozens, medics and witnesses said. Aljazeera reports:

There was no immediate claim of responsibility but Sanaa has been shaken by a string of bombings by the Islamic State of Iraq and the Levant (ISIL) group in recent months targeting Shia Muslims.  Thursday’s blast ripped through the Balili mosque where Houthi Shia rebels who control Sanaa go to pray, according to witnesses.

It came as worshippers marked Eid al-Adha, the Feast of the Sacrifice, the most important holiday of the Islamic calendar.  Witnesses reported that after a first blast inside the mosque, a second suicide bomber detonated an explosives belt at the entrance as worshippers rushed outside. ISIL, a Sunni Muslim group which controls swathes of territory in Iraq and Syria, considers Shias to be heretics.

ISIL bomb attacks targeting several Shia mosques in Sanaa on March 21 killed 142 people. The group has also claimed attacks on mosques in Kuwait and Saudi Arabia. The capital of Sunni-majority Yemen has been under the control of the Iran-backed Houthi rebels for the past year. The Houthis have also expanded their grip to other parts of the country.