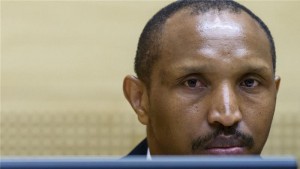 A rebel leader known as “The Terminator” has told judges trying him at the International Criminal Court in The Hague that he was a professional soldier who never attacked civilians and tried to restore peace during a brutal conflict in eastern Congo. BBC reports:

“I have never attacked civilians,” Bosco Ntaganda said on Thursday, the second day of his trial on 18 counts of war crimes and crimes against humanity. “I have always protected them,” he added during a nine-minute speech to the court. “I have been described as The Terminator, as an infamous killer, but that is not me.”

His comments were a stark contrast to how prosecutors portray Ntaganda – as the leader of a rebel militia that murdered, raped and persecuted innocent villagers in the Ituri region of Congo during a brutal conflict there from 2002-2003.

Sarah Pellet, a lawyer representing 297 former child soldiers, told the three-judge panel that recruiters from Ntaganda’s militia took children from school yards or forcibly snatched them from their families and fed many of them drugs and alcohol to dull their fear in battle.