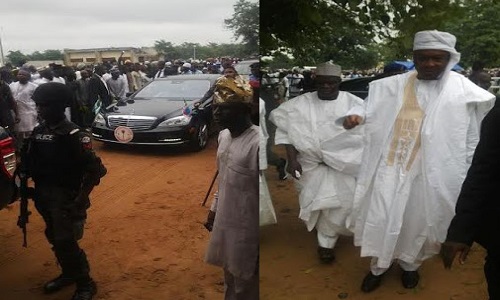 Senate President Bukola Saraki’s travails at the Code of Conduct Tribunal paled to insignificance on Thursday as angry worshippers at the Eid praying ground in Ilorin, the Kwara State capital, pelted him, the Emir of Ilorin, Alh. Ibrahim Sulu Gambari, and many political figures with sachets of pure water and stones.

It was learnt that the Chief Imam of Ilorin, Alh. Muhammadu Bashir was not spared the wrath of the protesters.

Others who were victims of the spontaneous mob action were ex-Minister Bolaji Abdullahi, the Speaker of the Kwara State House of Assembly, Ali Ahmad, ex-Speaker Razak Atunwa (now a member of the House of Representatives) Rep Amuda Kannike, a former acting National Chairman of the PDP, Alh.

Kawu Baraje, the Taliban of Ilorin, Prof. Oba Abdulraheem, members of the State House of Assembly, all the Baloguns, Magajis and prominent leaders in Ilorin Emirate.

The protesters were said to be angry about the state of the economy of Kwara as well as the non-utilization of the bailout funds given to the state by the Federal Government to offset workers’ salaries.
There was speculation the protesters were reacting to rumours that part of the bailout funds was used to offset the bill incurred during Saraki’s campaign to emerge President of the Senate.

Although the prayer was fixed for 10am, there was tension as early as 8am at the Eid Praying Ground, The NATION reports.

It was evident that most worshippers were out for blood because the initial waazi (sermon) segment of the Eid fell on deaf ears.

As the Senate president and others arrived the praying ground, there was intermittent shout of “Ole! Ole!! Ole!!! (Thief, thief, thief) in Yoruba while others were shouting “Ebi n pa wa!” “Ebi yii tito Saraki!” “A o ki run, e fun wa lounje!” (We are hungry, enough of this hunger Saraki, we refuse to pray, give us food).

The cacophony of vituperations were hardly subsided when stones and missiles began to fly from all over at the dignitaries.

The police, security agents, and members of the Nigerian Security and Civil Defence Corps, NSCDC, battled spiritedly to curtail the protesters, who remained defiant.

As the atmosphere became increasingly charged, teargas canisters were fired by the police and security agents.

After about 30-minute protest, temporary calm was restored which paved way for the observance of the two Nafilats (prayers).

But as the dignitaries were filing out, the protesters resumed hurling missiles again.

As at the time of publishing this report, there was apprehension in the Senate president’s camp over who was responsible for the attack.

The apprehension was made worse by the fact that Governor Ahmed Abdulfatah, probably aware of security reports of the possibility of a showdown, went to Share, his hometown, to observe the Sallah prayers.