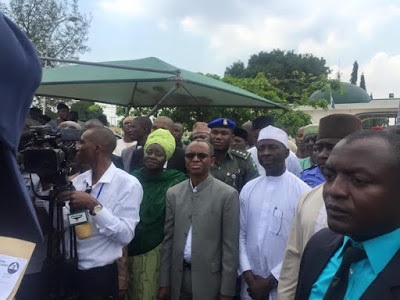 Governor Nasir el-Rufai has declared himself fit as a fiddle after rumours of his purported collapse and near-death spread like a wild-fire last week.

He described the rumours as a mere hoax designed by mischief makers for purposes best known to them.

The governor stated this while receiving members of the Kaduna State chapter of Nigeria Labour Congress and the Trade Union Congress at the Sir Kashim Ibrahim House on Thursday.

El-Rufai told the workers that not only is he alive, hale and hearty, he is determined more than ever, to make Kaduna great again.

“You can say el-Rufai has collapsed and died, but here I am. I am alive. My deputy is here; he’s alive and can continue the good work we are here to do for the good people of Kaduna State.

“Only last weekend, my deputy announced that some money (N24bn) has been recovered from various accounts in the state because of the single account we now operate. Some people became jittery. Now they are peddling rumour that I collapsed and was taken out of the country.

“Let me say it here that here I am and your money – Kaduna’s money, is alive and intact. Kaduna State now has money to pay its workers and all civil servants will get their pay before Sallah. We will not wait for federal allocation before we pay workers”, he said.

El-Rufai added that he cannot be deterred by the antics of mischief makers who were uncomfortable with steps taken by his administration so far, especially those occupying the premises of government schools illegally.