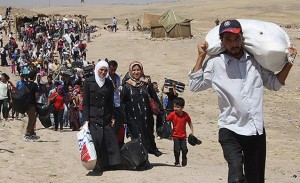 European Union leaders have pledged at least $1.1bn to UN agencies to help refugees in the Middle East and agreed on closer cooperation to stem the flow of refugee into Europe at a summit described as less tense than feared after weeks of feuding. Aljazeera has more:

Chairman Donald Tusk said the emergency meeting, which ended early on Thursday after seven hours of talks in Brussels, was “really excellent, for sure much better than we expected”. Tusk said he had heard “very substantial and energetic” exchanges between the Austrian and Hungarian leaders, whose common border was among those affected by refugees this summer, but not the mutual recrimination that has threatened to tear apart the bloc’s cherished passport-free Schengen zone.

“Today’s meeting and this atmosphere are a very positive sign,” said European Council President Tusk, a former prime minister of Poland. “It’s quite a symbolic moment for me as it’s clear we have stopped this risky blame game.”

German Chancellor Angela Merkel, criticised by some eastern neighbours for what they saw as actions that have fuelled the influx of people trying to reach Germany, voiced satisfaction: “We know that the problem is not solved with the decision taken. But we have taken one of many necessary steps. “I got the feeling that we want to tackle this task together.”