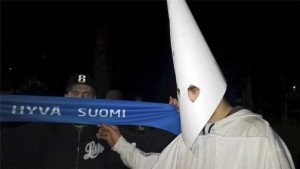 Demonstrators have attacked a bus load of refugees arriving at a reception centre in southern Finland with stones and fireworks. Between 30 and 40 protesters, one wearing a white robe like those worn by the white supremacist group the Ku Klux Klan in the US, waved the Finnish flag and shouted abuse at the bus in the southern town of Lahti late on Thursday.

Some demonstrators also hurled stones and let off fireworks at the vehicle carrying 40 refugees, including several young children, Finnish television YLE said. “The protesters were young people from Lahti… At this point we have no indication that they would be somehow organised,” chief inspector Martti Hirvonen told the local Finnish outlet STT, according to the AFP news agency.

Meanwhile, a petrol bomb was thrown at another reception centre in Kouvola, also in southern Finland, police said. No one was known to be hurt in the incidents, the Reuters news agency reported.

“The Finnish government strongly condemns last night’s racist protests against asylum seekers who had entered the country,” the government said in a statement. “Violence or the threat of violence is always to be condemned.”