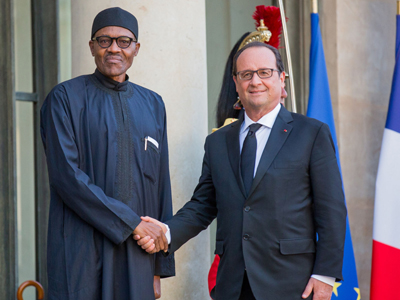 French President François Hollande has pledged his administration’s support of the Multinational Joint Task Force (MNJTF) with equipment and intelligence gathering in the fight against terrorism and other forms of extremism in Nigeria and Africa.

The MNJTF is the almost 9,000-strong force constituted by Nigeria, Chad, Cameroon and Benin to fight the Boko Haram sect.

President Hollande made the pledge at a joint press conference at the Elysee Palace, with visiting President Muhammadu Buhari, who is on a three-day working visit to Paris.

The French President also said the fight against Boko Haram and Islamic State jihadists is the same battle.

He warned that Boko Haram had expanded “after declaring its loyalty to IS”, adding that the jihadists’ alliance, announced in March, had given the Nigerian terrorist group “a source of material resources”.

“We know Boko Haram is linked to Daesh and so receives help, support from this group,” Hollande said, using the Arabic acronym for the IS group.

“To fight Boko Haram is to fight Daesh, and we can no longer single out terrorism according to regions.

It is the same terrorism, inspired by the same ideology of death”, the French leader added.

Mr. Hollande said his government was concerned about the increasing spate of insecurity in Nigeria and West Africa and is ready to render support in tackling extremism.

He said he discussed with President Buhari new strategies of partnership that would enable Nigeria and its neighboring countries – Cameroun, Chad, Niger and Benin Republic – through the joint action of the MNJTF to fight the insurgency and restore the peace.

As an intervention approach to assist in the fight, Hollande recalled that France last year hosted a Regional Summit on Security in Paris which brought together the neighboring countries to chart the way forward.

He said: “We provide all of the support to the countries in the region which are affected by this cult and in Nigeria; we want to provide support and solidarity”.

Thanking Mr. Buhari for his recent actions towards defeating terror, Hollande said France had concluded arrangements to invest 130 million Euros in the development of infrastructure in Nigeria for rebuilding of roads, provision of electricity and water supply.

Despite the fall in the price of crude oil in the international market which has affected Nigerian expected revenue, the French president noted that the country’s economy still remained strong.

“The Nigerian economy remains strong so, France wants to be doing business in the country”, he stressed.

President Buhari thanked the French government for its interest in assisting Nigeria and expressed readiness of his administration to partner with France.

With the commitment from France, Buhari said Nigeria’s next shopping list regarding support will move to other members of the G7.

He said: “We have to depend on France and the other G7 countries for support to fight piracy.

“Our next shopping list is going to G7 in terms of intelligence and training. Another problem is the problem in the Gulf of Guinea, from Senegal to Angola, that area is endowed with resources like petroleum and other minerals but surrounded by piracy and theft.

“We are going to depend on France and the G7 countries to flush these criminals out of the region.

“On Nigeria’s problems, more than 67 per cent of our youths and most of them under their youthful age are unemployed. We are finding best way in Agriculture and mining to address this before sophisticated infrastructure and security, are provided.

“We want to make sure we feed ourselves and provide security before other things are also tackled”.
Nigeria and France, last year, signed bilateral agreements which enables the French government to provide $1,170 Million soft loan through the French development agency AFD for the construction of high voltage power lines and substations that will connect Abuja with electrical distribution network.

President Buhari will today continue his visit and hold talks with the business community in France. He is due back in Abuja on Wednesday.