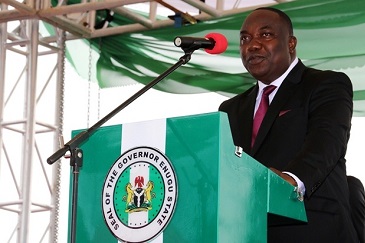 Governor Ifeanyi Ugwuanyi of Enugu State has expressed worries over the lack of modern and well-equipped hospitals in the South East geo-political zone.

Underscoring the need for modern health facilities in the zone, Mr. Ugwuanyi noted that the diagnostic centre being built by the state government was meant to reduce the current craving of the people for medical attention abroad.

Speaking when the management team of Star Deep Water Petroleum Ltd, a Chevron and Agbami co-venture, paid him a visit in Enugu, the governor appealed to the group to come to the aid of the area by establishing a befitting hospital.

He equally requested the group to establish a modern library for the large number of higher institutions in Enugu to facilitate not only teaching and learning, but also to encourage research works among the lecturers and students.

He said indigent students from the state also needed scholarships from the group.

He commended the group for building a fully-equipped chest clinic at the district hospital in Enugu-Ezike in Igboeze North Local Government Area.

“I am convinced that you are a worthy partner that has touched our hearts and the lives of our people. May my good Lord reward you”, he said.

Earlier in a speech, the managing director of Star Deep Water Petroleum Ltd, represented by Stan Otuonye, informed the governor that the group was in Enugu to commission an equipped chest clinic at the Ogrute District Hospital, Enugu-Ezike.

He noted that the group had built 24 chest clinics in different parts of the country.

The managing director said that the co-venture had instituted specialised educational scholarship programmes in support of health and engineering manpower development through targeted support.

He added that the group was also into economic empowerment whereby it helped farmers to increase food production.

He said that Agbami oil field, one of the country’s biggest oil blocs, was located about 70 miles offshore, adding that area was viewed as belonging to the entire country in line with the principle of deep offshore oil exploration.

The Agbami co-venture is made up of Fanfa Oil, NNPC, Statoil, Chevron and Petrobras Nigeria.