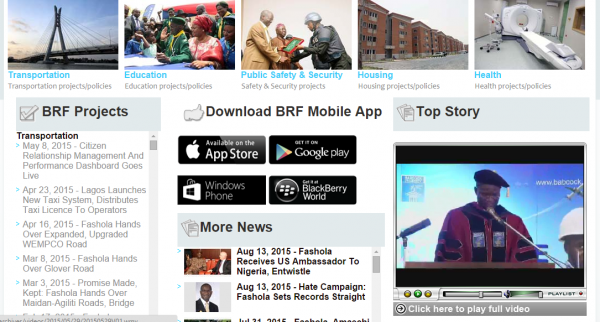 A group which advocates transparency in government and public spending BudgIT, has knocked the Lagos State Government for removing the budgetary spending of former Governor Babatunde Fashola from the website of the Lagos State Public Procurement Agency.

Fashola, according to information posted on the state government’s website, spent N78.3m on his personal website, www.tundefashola.com, and also spent N139m to drill two boreholes at the Lagos House, Ikeja.

Following the uproar caused by the revelation, the Governor Akinwunmi Ambode-led government removed the information from the website.

However, BudgIT, in a statement by its Lead Partner, Oluseun Onigbinde, faulted the state government for removing the budget without explanations to taxpayers.

BudgIT, which was responsible blowing the lid open on the former governor’s controversial website, said the action was in clear violation of the objectives of the procurement agency.

In a letter addressed to Ambode and the office of the state attorney-general, Onigbinde said the action was at variance with Ambode’s campaign promises, which includes transparency in government.

The letter read in part, “It has come to our notice that previously published awarded contracts between 2013 and 2014 and approved by your agency has been removed from your website, www.lagosppa.gov.ng, without an explanation to taxpaying residents of Lagos and in clear violation of the Lagos State Public Procurement law.

“The (removal of the budgetary spending) action which, is in clear violation of the objectives of the agency to ensure probity, accountability and transparency, is also an outright negation of Governor Ambode’s promise to Lagosians. In his campaign manifesto, Governor Ambode stated that his message is clearly to ‘embrace the three tenets of probity, accountability and transparency”,

BudgIT expressed disappointment that rather than answer questions raised by Lagosians regarding how the state government could approve such huge sums of money for Fashola, the Ambode-led government chose to embrace secrecy.

The group, therefore, urged the government to ensure that the budgets were restored on the website as this was the only panacea to restoring public confidence.