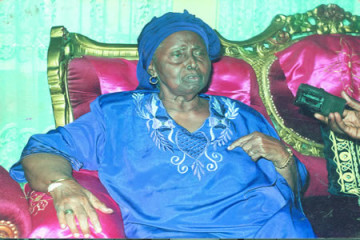 As tributes continue to pour in for matriarch of the Awolowo dynasty, Chief (Mrs.) Hannah Idowu, it has been revealed that the nonagenarian died praying for her children, grand-children and great grand-children.

Mama Awolowo passed away on Saturday at exactly 3.15am at her Ikenne home, Ogun State.

Two months shy of 100 years old, mama, also known as Yeye Oodua, was said to have attended a meeting of her forthcoming centenary birthday earlier in the day before retiring into her room, where she took her last breath.

According to a statement signed by her eldest daughter, Mrs. Omotola Oyediran, on behalf of the family, mama had her dream death as she was surrounded by her children, grand-children, great grand-children and close family members.

The statement read in part, “She shared a precious few minutes with them when she went in to pray for them, as they met to plan her centenary birthday.

“They sang her a befitting song as she came in and she continued to pray for them. She died a couple of hours later, as she had always wished, surrounded by her children, grand-children and great grand-children”.