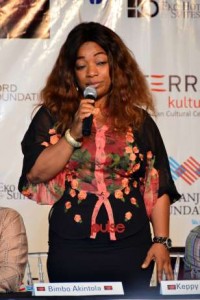 Veteran busty Nollywood actress, Bimbo Akintola has revealed that her new trimmed look is as a result of hours of exercise in the gym.

Bimbo, who was spotted at the media unveil of the cast and crew of new flick, ’93 Days’ looking so trimmed, made this disclosure recently.

In a recent chat with The Punch, Bimbo said, “I do a lot of exercise. I did not do liposuction. If you go to Eko Gym, I am usually there by 5:40am and I work out for hours. But anytime I am shooting a movie, I hardly have time to go to the gym.”