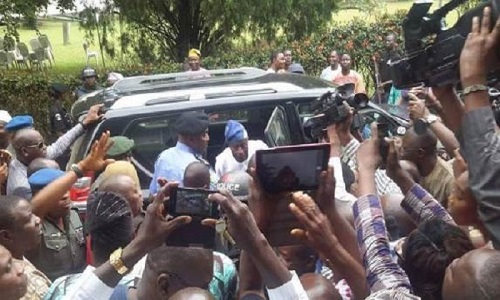 The Force Headquarters has issued a statement on the rescue of former Secretary to the Government of the Federation, Chief Olu Falae, who was abducted from his farm on Monday in Akure, Ondo State.

A statement issued on Thursday by the Force Public Relations Officer, Acting Assistant Commissioner of Police, Olabisi Kolawole, said the rescue of the elder statesman was made possible by the Inspector General of Police, Solomon Arase, who coordinated both aerial and land operations.

The statement reads in part:
“The operation which started in the early hours of the aforementioned date, combed every nook and cranny of Ondo state till success was achieved in Owo.

“Speaking in Owo while re-uniting Chief Olu Falae with his family, the Inspector-General of Police said; ‘those who think Nigeria is lawless should have a rethink as the Nigeria Police Force and other sister agencies are everywhere to deal decisively with those miscreants who intend to test the capabilities of the Force’.

“He further said that the Former Secretary to the Federal Government is hale and hearty meanwhile, the Nigeria Police promised to leave no stone unturned till the perpetrators of the dastardly act are brought to book”.