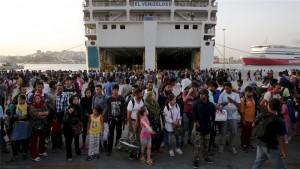 Hungary’s Defence Minister Csaba Hende resigned after a national security council meeting was held to discuss the huge influx of refugees and migrants arriving in the country. Aljazeera was on site:

Prime Minister Viktor Orban, a right-winger who has pushed for a hard line on Europe’s immigration crisis, accepted Hende’s resignation on Monday and offered the job to Istvan Simicsko, also a member of his Fidesz party.

The country, which has seen more than 100,000 people arrive, many fleeing conflict in the Middle East, last week proposed measures that would allow it to deploy the army to its borders in a bid to stem the inflow.

The Greek island of Lesbos is “on the verge of explosion” with the arrival of more than 15,000 mainly Syrian refugees, pushing local resources to the limit, the immigration minister said.

Yiannis Mouzalas told To Vima radio on Monday that boats taking refugees to the Greek mainland would soon be using a second port to ease pressure on the island of 85,000 inhabitants.