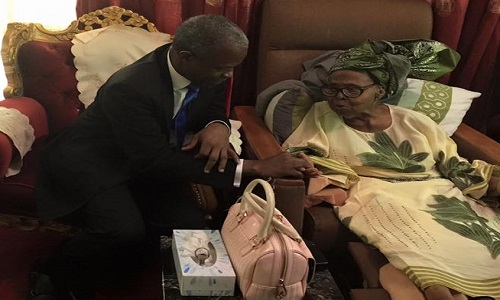 The Vice President, Prof. Yemi Osinbajo (SAN), said on Sunday that he was unhappy that Chief (Mrs.) Hannah Awolowo did not live to see “a new Nigeria.”

The vice president, a son-in-law of Mrs. Awolowo, stated this while addressing hundreds of sympathisers who gathered to honour the deceased at the Efunyela Hall in Ikenne, Ogun State, on Sunday.

The vice president noted that the deceased was an important part of the sage, Obafemi Awolowo.
“We are in mourning at this moment, although we celebrate mama at this time. For some of us, mama knew us even when we were born. I don’t even know how to describe the sense of loss because mama was always there. Whenever you thought about home, be rest assured that Mama will be there.

“Even when papa (Mr. Awolowo) was not around, mama was always there‎, always available, always around. I think that one of the great things that has been said is all about her great love for people.

“She has a personal relationship with practically everybody; those who are family members and those who are not. Many times she would call us up and say you have not called her in weeks and she would remind you of the previous conversation she had with you.

“She was always very caring, devoted and loving. We all know that she stood by papa, so solidly that he had to describe her as the most important part of his life. He said repeatedly, aside from describing her as a jewel of inestimable value, that he would not know what he could have done without her but she survived him and lived so long thereafter.

“We all looked forward to her 100th birthday but we heard the sad news on Saturday that mama has departed. I really wished that she would have been here to ask me a few questions because every time I met mama, she said ‘Yemi don’t cross examine me’.

“She lived for this nation, every day of her life, she wanted to see a great nation and I know that she had begun to see that great nation, the evolution of this nation in the past years has shown that we are on the right path and we would get there.