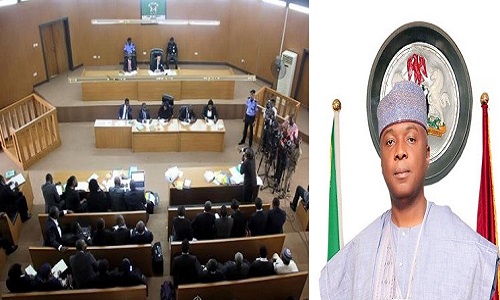 Senate President Bukola Saraki’s travails seem to be far from over as the Code of Conduct Tribunal has restated its order directing the Inspector General of Police to arrest and produce him before it by 10:00am on Tuesday, to answer charges pending against him.

Led by Justice Danladi Umar, the tribunal rejected the accused lawyer’s prayer that it stay proceeding to await the outcome of an appeal he filed against the bench warrant earlier issued on Friday.

The tribunal also dismissed the argument by the Senate president’s lawyer, Joseph Daudu (SAN), that the newly passed Administration of Criminal Justice Act (ACJA) – which seeks to discourage undue delay – is not applicable to the tribunal.

It noted that the purported order made last week by Justice Ahmed Mohammed of the Federal High Court, Abuja, did not stay the proceedings before the tribunal.