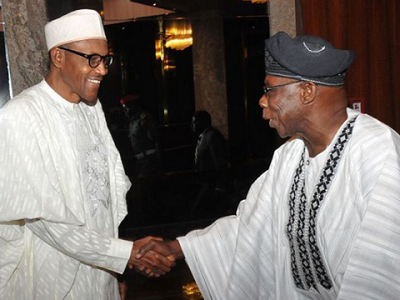 Former President Olusegun Obasanjo has given insight into some of the discussions he held with President Muhammadu Buhari when he visited the latter at the Presidential Villa, Abuja last week.
Speaking with PREMIUM TIMES, the former president said he went to brief Mr. Buhari on the outcome of his trip to Guinea Bissau and to also discuss what he called “other national issues”.
Asked whether he raised the issue of alleged lopsided appointments with the president, Mr. Obasanjo said, “I am reasonably satisfied with his performance so far, and I can’t see any reason that will make me raise any alarm at this time”.
The meeting of the two leaders, which held inside the president’s office, lasted for about an hour. Mr. Obasanjo later declined to speak to State House correspondents about his mission to the seat of power.
Shedding more light on his discussion with the president, Obasanjo said “He appointed me as his envoy to Guinea Bissau, so I needed to see him to discuss the issue of Guinea Bissau and other national matters”.
President Buhari appointed Obasanjo as his peace envoy to Guinea Bissau to help restore order after Prime Minister Domingos Pereira and his entire cabinet were sacked by President Jose Mario Vaz.
On the appointments so far made by Mr. Buhari, the former president simply said, “I made inquiries and he briefed me extensively”.