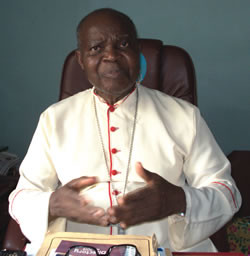 The respected clergy noted that the current anti-corruption drive of the Buhari administration would be made easier if suspected looters are given the option of returning their ill-gotten wealth quietly without subjecting them to public condemnation.

Okogie, who made this known in an interview on Monday, said it was also cheaper to recover loot through dialogue than charging suspected public fund thieves to court.

He said, “I agree with the National Peace Committee that the President should tread softly and should set criteria that he is going to use. Corruption is endemic in Nigeria. That is why they are asking for caution: ‘Look at it properly’”.

He also advised President Buhari to invite those suspected to have looted government treasury “to speak to their conscience”.

Warning that suspected looters would use their ill-gotten wealth to frustrate attempts by government to secure their conviction for corruption, Okogie called for a holistic clean-up of the country’s judiciary.

He said, “People like that, when they go to court, they don’t look right and left before they do things. If I have a man like that and I know he has the money, I will weigh the options; ‘will it profit the nation if I take this man to court. If I take him to court, he is going to get a lawyer. The lawyer will be employed with part of the money I am looking for.

“The lawyer will now start to ask for adjournments and all what not. I may not get this money until after four years. And the judge too, in the meantime, is getting (part of the loot); you will not know. He won’t just adjourn anyhow.

“The lawyer will invite his brother (the judge) to come and get part of the cake until half of it will be gone. We have to look at the issue from that angle. And you may end up getting nothing”.

When asked if such would be possible in a sanitized judiciary, he asked, “Is it sanitised?”

According to Okogie, these are the areas President Buhari ought to have started his anti-graft war by “sanitising and purifying” the judiciary first. “At least, you will know that three-quarters of the place is tight, and then you can start (the probe)”, he added.

Okogie also attributed the increasing spate of corruption in the country to declining moral upbringing of children.

He said, “Look at the probe that is going on now, for example; how can one person manage to get (steal) one-point-something billion; not even million but billion, and very soon you will hear of trillions? Where did he get it from? That is how it is going on, and he is from a family.

“And if his conscience worried him, he will run to his pastor to say ‘I want to pay tithe – 10 per cent; this is my tithe’. The pastor collects the tithe. Seeing that it is huge money, the pastor will ask him, ‘what can I do for you?’”