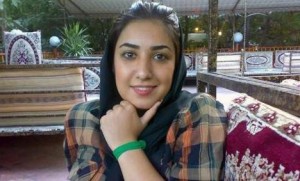 A woman was arrested and faces charges for shaking the hand of her attorney.  Over 10,000 people have signed a petition for the release of a jailed Iranian artist, who will likely face prison for shaking the hands of her male lawyer. Scoop has more:

When her attorney came to see her in jail, Farghadani allegedly stretched out her hand to shake his hand. Handshakes between men and women are illegal in Iran. She and her attorney, Mohammad Moghimi, were both charged with illegitimate sexual relationship short of adultery.

Moghimi said that his client, who is facing a sentence of 12 years in prison, will likely face a longer prison term, due to the handshake.

A petition launched by Amnesty International, is calling for Iran to release Farghadani immediately. The petition was sighted by 10,608 people.