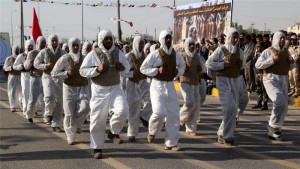 The Iraqi military has officially announced it is to begin sharing “security and intelligence” information with Russia, Syria and Iran to help combat the advances of the Islamic State of Iraq and the Levant (ISIL) group. Aljazeera has more:

A statement issued by the Iraqi Joint Operations Command said the countries would “help and cooperate in collecting information about the terrorist Daesh group (using the Arabic acronym for ISIL).” “It’s a committee coordinating between the four countries, with representatives of each country, in the field of military intelligence and aimed at sharing and analysing information,” Saad al-Hadithi, a spokesman for
Prime Minister Haider al-Abadi’s office, told the AFP news agency.

Hadithi said the countries would focus on “monitoring the movements of terrorists… and degrading their capacity”. He did not say if they had already begun their work.

Al Jazeera’s Imran Khan, reporting from Baghdad, said despite the official announcement, the cooperation between the countries “was nothing new”. “As the Syrian crisis became a war Iraqi militias went to Damascus to protect holy shrines there and to defend the Assad regime, in a deal brokered by Iran,” our correspondent said.