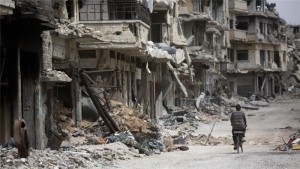 The Islamic State of Iraq and the Levant (ISIL) fighters have captured the last major oilfield under Syrian government control during deadly clashes over a vast central desert zone, a monitoring group said. The Jazal field was now shut down and clashes were ongoing east of Homs, with casualties reported on both sides, the UK-based Syrian Observatory for Human Rights said, without giving dates or more details.

Syria’s army said it had repulsed an attack in the same area but did not mention Jazal or comment on how much of the country’s battered energy infrastructure remained under its sway. It said it killed 25 fighters, including non-Syrian fighters.

“The regime has lost the last oilfield in Syria,” said the Observatory, which tracks violence through a network of sources on the ground.

Jazal is a medium-sized field that lies to the north west of the rebel-held ancient city of Palmyra, close to a region that holds Syria’s main natural gas fields and multi-million-dollar extraction facilities. The Observatory also reported heavy clashes between government forces and ISIL in the eastern suburbs of Homs province.