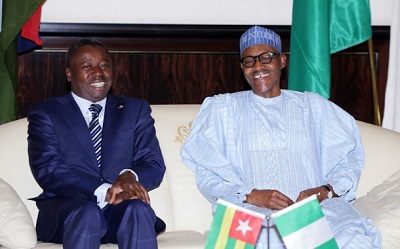 President Muhammadu Buhari said on Thursday that it is not easy for his administration which, he said, is fighting on many fronts.

According to him, the government is confronting the insurgency problem in the North-East and oil theft in the South-South while trying to provide basic infrastructure in the country at the same time.

Buhari, who made this observation when President Faure Gnassingbe of Togo visited the Aso Rock Presidential Villa on Thursday to invite him to a security summit in Togo in November, 2015, pointed out that development would be impossible without security.

He, therefore, called for cooperation among African countries to combat terrorism, piracy and other security challenges facing the sub-region.

The Nigerian leader also stressed the need for African countries to pay closer attention to agriculture and manufacturing to provide jobs for unemployed youths.

He also expressed appreciation for Gnassingbe’s visit and for his concern about regional security, Boko Haram insurgency, oil theft, illegal fishing, oil pollution and the dumping of toxins.

“His (Gnassingbe’s) concern about regional security made it imperative for him to organise a summit on maritime security and development in November to examine a lot of issues.

“As for Nigeria, we are grateful for the sympathy and the goodwill expressed, touching on the performance of our armed forces and law enforcement agencies, since this administration came into being. It is not easy trying to fight on so many fronts, the North-East, the South-South and then try to provide infrastructure in our country”, Buhari said.

The president observed that the cooperation of the regional countries comprising Cameroon, Chad, Niger and Benin Republic had resulted in the isolation of Boko Haram and a chance of peace in the region.

Speaking earlier, the Togolese leader commended his host and the Nigerian security forces for the work they are doing to combat terrorism in West Africa.

President Gnassingbe informed Mr. Buhari that the security summit being hosted by his country would deal with issues of piracy, oil theft, environmental pollution, immigration, as well as human and drug trafficking.

When asked by State House correspondents if African countries were not hosting too many summits, Gnassingbe disagreed, saying the summits were not enough.

He said, “Piracy alone costs the Gulf of Guinea $7billion a year, that is what we lose for not combatting it and we also know that without cooperation you cannot combat piracy, but the first stage is to come together and talk.

“If all the African countries are on the same page, it would be easy to tackle the security challenges, so we have to keep holding summits, because individual countries cannot combat piracy effectively without cooperation.

“If you try to fight them in Togo, they go to the next country, then you don’t have the mechanism to go into the other countries. So summits are necessary, they are not even sufficient”.