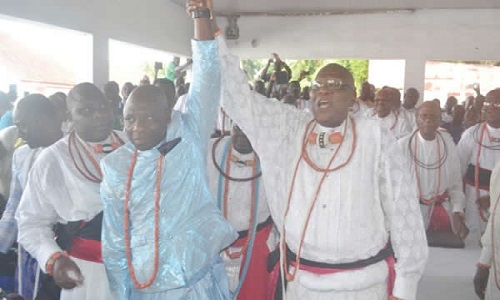 Speculations about the health status of the Olu of Warri Kingdom, Ogiame Atuwatse II, were on Saturday laid to rest as the Itsekiri nation announced his passing away as well as Prince Godfrey Ikenwoli Emiko as his successor.

The Olu designate was also officially presented to the public.

A 90-day mourning period was also declared as a traditional mark of respect to the departed 70-year-old monarch, who sat on the throne of the Itsekiri nation for 28 years.

Within this period, every adult male and female of the Itsekiri nation is expected to have their wrappers tied upside down, just as there will be no burial ceremony, drumming or any other form of celebration within the specified period of mourning.

This was made known on Saturday at Ode-Itsekiri, popularly called the Big Warri, Warri South Local Government Area, by the most senior member of the Olu Advisory Council and the Ojomo of Warri Kingdom, Chief Tesigiweno Yahya Pessu, after performing the required traditional rites.

The Ojomo performed the traditional rite of smashing on the ground three times a substance tied in red cloth symbolising the end of the era of Ogiame Atuwatse II.

This was followed by by several cannon shots fired into the air as a mark of respect to the late Olu according to the custom of the Itsekiris.

Speaking after the official presentation of the Olu designate, Pessu said the reaction of the jubilant crowd signified his mass acceptance.

Pessu said, “You can see the crowd dancing. It is an evidence of acceptance. The significance of the rite I performed is to tell the Itsekiri people the passing away of the king. And when a king passes away, a new king is installed immediately”.
According to Itsekiri tradition, the Olu of Warri’s mother must either be an Itsekiri or from Benin

Kingdom before he can be chosen, a long-standing tradition that ruled out the first son of the late monarch, Prince Shola, as Olu designate.