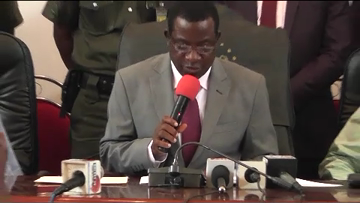 Governor Simon Lalong of Plateau State said on Sunday that he has not received any salary since he assumed office in May, due to paucity of funds in government coffers.

Mr. Lalong made the disclosure to Journalists in Jos, the state capital on Sunday night at a media chat to mark his 100 days in office.

He said the media parley was for citizens of the state to assess his performance since he assumed office on May 29, 2015.

The governor also pointed out that the precarious financial situation of the state was also the reason for the delay in making political appointments.

“Even those I have appointed so far have not been paid salaries.

“I myself have not received a single month salary as I speak with you; we want to settle civil servants salaries first”, he said.

On insecurity, Governor Lalong said 150 additional mobile police officers were recently deployed in the state to curb communal attacks, particularly in Barkinladi and Riyom local government areas, where violence has continued to escalate.

On the recovery of public funds allegedly looted by officials of the Jonah Jang past administration, Mr. Lalong said he has handed the matter to the anti-graft agency, EFCC, to investigate and bring defaulters to book.

“Since the two weeks grace I gave them elapsed without any response, I have written to EFCC to take over from where we stop, but if they delay in the assignment, I will remind them again”, he said.

Mr. Lalong also said his administration has paid 5 out of the 7 months workers’ salaries arrears he inherited.

“We will pay the 6th month tomorrow (Monday)”, he said.

The governor also said that the Plateau crisis lingered because security operatives were owed 6 months allowances, which his administration has since settled.

Lalong explained that the state was yet to access the federal government bailout funds.

He, however, said Plateau will be in the next batch of states to receive the bailout funds.

Commenting on the allegation that his administration has already borrowed money, he explained that the loan of N4.5 billion, which he took, was to settle workers’ salaries.

He assured that his administration would not delay in conducting elections into local governments, but noted that the dissolved council executives were in court and therefore elections could not hold.

Lalong assured that his administration would welcome constructive criticism from the media, but would not tolerate irresponsible journalism.

Commenting on the media chat, the Chairman of the Nigeria Union of Journalists, Plateau State Council, Yakubu Taddy, commended the initiative.

The Plateau NUJ boss appealed to the governor to be media friendly so as to avoid unnecessary rumours about his administration.