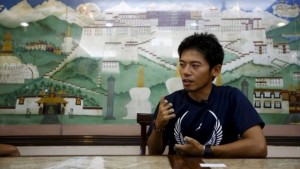 A Japanese mountaineer who has previously lost nine fingers to frostbite is nearing the final stage of an attempt to climb Mount Everest. Latest contact suggests that Nobukazu Kuriki, 33, has reached the South Col, where he will rest before a final push later on Saturday to reach the summit. Mr Kuriki is the first person to attempt the climb since Nepal’s devastating earthquake in April. BBC has more:

It will be his fifth try at reaching the summit in the past six years. Mr Kuriki is expected to rest on the South Col for about seven to eight hours before attempting the final leg of the climb. It is not uncommon for climbers to set out for the summit late at night to reach the top around dawn, Ang Tsering, the president of the Nepalese Mountaineering Association, told the BBC.

Tackling the final stretch overnight allows climbers to reach the summit and descend in daylight, and the lack of heating from the Sun can mean lower winds. “We are very much hoping he will be successful and come back OK,” Mr Tsering said. Mr Kuriki, who arrived in Nepal more than a month ago to begin acclimatising, is so far the only person scheduled to climb Everest during the challenging autumn season.

He is following the same route used by Edmund Hillary and Tenzing Norgay when they became the first people to reach the summit in 1953.