Juventus striker Mario Mandzukic will be sidelined for three weeks with a thigh injury.

The Croatian and fellow striker Alvaro Morata were substituted towards the end of Juve’s 0-2 win away to Genoa on Sunday.

“He will be sidelined from competition for 20 days,” a statement on the Italian champions’ website read.

Juve has positive news from tests conducted on Morata, who complained of abdominal pain on Sunday, disclosing that there is no strain or tear.

Juventus are in Sere A action at home to Frosinone on Wednesday. 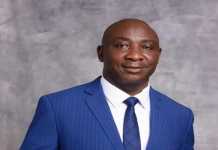