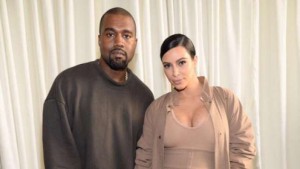 I know a lot of people would want to have Kim K’s head for this statement.

Kim K West has said that she thinks his clothes are the epitome of couture and believes he’s the next Versace!

Despite the bad review on the collection by many around the world, the pregnant star seems to have loved every piece of clothing shown.

“Kim is Kanye’s biggest cheerleader. She loves everything he does. She has told him that he’s on the verge of being one the world’s most renowned designers like Oscar de la Renta andVersace!” a source connected to the couple revealed to HollywoodLife exclusively.

Kim even promised Kanye that she’d rock every article of clothing shown at his collection immediately after she gives birth.

Apparently, Amber Rose thinks the opposite.

“Amber found the designer’s clothes tacky and thinks they should be used for drying cars. She feels bad for everyone who attended what she thinks was a disaster of a show. She especially feels awful for the models that had to wear that nonsense,” a source explained.