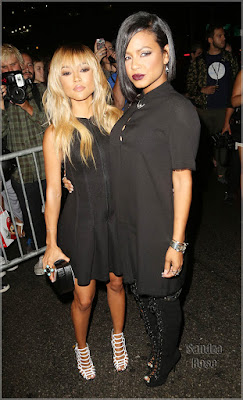 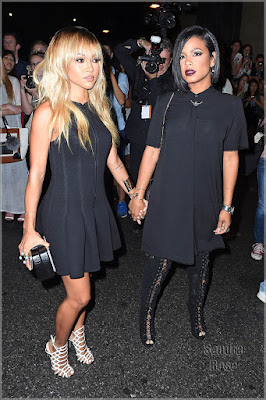 Women can’t be single and be best friends without them being [email protected]? US blogger Sandra Rose wrote a not so blind item with these pics, claiming there’s something going on between Karrueche and Christina who have ended their relationships with the celeb boyfriend. Below is what she wrote..

“These two Hollywood exes have reportedly given up on men for good and are now intimately involved with each other. The two women recently got out of abusive relationships with men. The women reportedly began dating exclusively 2 months ago – and they don’t care who knows it.”

One of the socialites, who has no kids of her own, is very much involved with raising her lover’s daughter. Word has it that the woman has assumed the role of “daddy” in the child’s life. They say she spends her own money buying expensive gifts for her new family. She is very jealous and controlling. The brunette keeps a tight leash on her lady. She allegedly gets very upset if her blond bombshell even glances at a man. Her girlfriend loves the attention. Meanwhile, insiders whisper how easily the brunette slipped into the role of stud lesbian. But it’s an open secret that she is an aggressive [email protected] who prefers lipstick [email protected] Can you guess who the couple is?