Home National News Odd News Lady Fired 30 Minutes After Getting Her Dream Job Because Of Her...
Facebook
Twitter
WhatsApp 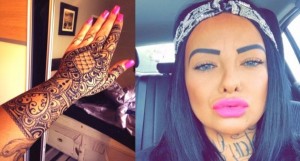 A woman who landed her ‘perfect’ job was fired half an hour later after the company learned she had a tattoo on her hand. Claire Shepherd applied for the role of retail merchandiser at logistics centre Dee Set in her home city of Swansea, Wales. Clearly impressed with her experience, the 27-year-old was offered the position after passing a telephone interview with ‘flying colours’. Scoop has more:

However, after discovering that Claire had inkings on her hand – which would be difficult to cover up – the firm backtracked and said they could not hire her as the design may ’cause offence’. Frustrated Claire, who got the intricate tattoo that extends from her forefinger, over her hand and on to her forearm 18 months ago, vented her anger on Facebook. She told her followers:

‘I got a new job today! And then I got sacked within half an hour. I had a telephone interview today with Dee Set for a retail merchandiser and was happy when at the end of the phone call she told me I had the position and would be starting next week. The company then sent me an e-mail with their dress standards. As I read it I was gutted as they noted that all tattoos must be covered up as they are likely to cause offence.

Thinking that this was an ‘old standard e-mail the company sent out’, Claire contacted Dee Set, hoping that their views had changed and explained that her emblem wouldn’t affect her work. She continued: ‘I have 6 years previous experience in managerial roles and my tattoos have never been an issue. That is until I applied for a role with Dee Set that work with Tesco, Asda, Boots and other chains. I was shocked when they replied and said they would no longer be employing me as I would not be able to cover my tattoos. They clearly thought I had something to offer and would be the right person for the job as they had already offered me the position,’ she said.