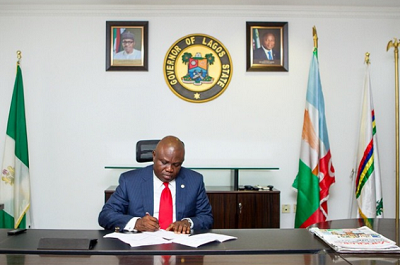 The Peoples Democratic Party (PDP) in Lagos State has taken a swipe at Governor Akinwunmi Ambode for his management of the state since he took over almost four months ago, saying he is incompetent and unprepared to lead.

The opposition party was reacting to Monday’s traffic congestion on the Third Mainland Bridge, Ikorodu Road, Ojuelegba, Apapa and other connecting routes following indiscriminate parking of vehicles by articulated truck drivers on bridges and other roads.

The Lagos PDP Publicity Secretary, Taofik Gani, who made the party’s position known, blamed the indiscriminate parking on the restriction placed on the movement of articulated trucks between 6am and 9pm by Ambode.

According to Gani, the governor was in the habit of taking hasty decisions without weighing the consequences, advising him to learn more about the peculiarities of Lagos State.

“Without trying to sound disrespectful, Lagos is crumbling under Governor Ambode. There is serious traffic congestion, Lagos State University is in its worst crisis ever and yet he says the state is moving forward.

“Lagos has been stagnant since he took over. He needs to apologise to the people of Lagos”.

The PDP spokesman said Gov. Ambode should have declared a state of emergency on the traffic situation in Nigeria’s commercial nerve centre within his first 100 days in office.

He also expressed bewilderment that the traffic situation continues to worsen under the All Progressives Congress-led government din the state in spite of claims by the immediate past Babatunde Fashola administration that hundreds of ferry operators had been licensed, while billions were spent on the light rail project.

The PDP also counselled Gov. Ambode to overhaul the Lagos State Traffic Management Authority rather than issue directives that would be of no effect to the agency.