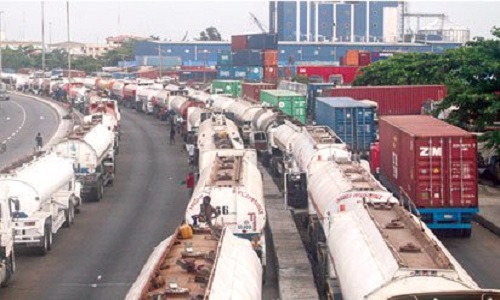 The National President of the Association of Maritime Truck Owners, Remi Ogungbemi, on Monday assured that the gridlock in the Lagos metropolis would clear within the next 48 hours.

Mr. Ogugbemi gave the assurance while speaking on the latest gridlock locking down Nigeria’s economic capital.

He said various stakeholders had been working tirelessly with the Nigerian Customs Service to clear backlog of trucks at the ports to allow vehicles pass.

“Since the Lagos State Government relaxed the restriction of trucks to start moving in the day, accessing the ports had been difficult, due to trucks trapped by the law.

“Trucks in the port have to go out for incoming ones, the Nigeria Customs Service have to clear the ones in the ports, hence the backlogs that locked down Lagos.

“I hope it will get better within 48 hours as stakeholders are working tirelessly to ensure free flow of traffic and we are sorry for the inconveniences”, he said.

The Lagos Sector Commander of the Federal Road Safety Commission, Hyginus Omeje, said the gridlock was a deliberate action by truck and trailer owners.

“The whole trucks and trailers that were supposed to go into the ports are lined up on the road in Apapa and other roads in the state.

A senior officer of the Lagos State Traffic Management Authority who pleaded anonymity, also said that LASTMA was disappointed over the gridlock.

“We have held several meetings with them on their operations not affecting other road users but they would not comply, the stakeholders should help talk to their people.

“Our men have been positioned at strategic places to work with other traffic agents to put the situation under control before the end of the day”, the LASTMA officer said.

A driver of one of the articulated vehicles, Akeem Olaosebikan, said the gridlock was as a result of the law restricting the movement of the vehicles.

“We have been on this queue since Saturday trying to get inside the port. I think the situation is because some trucks inside the port are unable to come out due to the time.

“Since the State Government has relaxed their order, I think some trucks will be finding their way out so that the gridlock will reduce”, Mr. Olaosebikan said.

Another truck driver, Adekunle Teslim, urged government to rehabilitate alternative roads leading to the port to reduce congestion on the Apapa-Orile road.

“There are other roads leading to the Wharf but due to the bad state of the roads most trucks drivers concentrate on the Apapa-Orile axis.

“If government can repair Mile 2-Tin Can road, I think it will be better because it will reduce traffic on the Apapa route”, Mr. Teslim said.

But a commuter, James Oduteliwo, appealed to the Lagos State Government to intervene quickly to end the gridlock, noting that transport fares had skyrocketed, due to the gridlock.

“I spent close to three hours on the road before getting to the office, government should do something about this current situation”, Mr. Oduteliwo said.