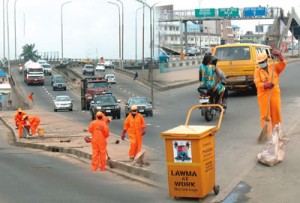 Scores of highway sweepers under the Lagos State Waste Management Authority (LAWMA) on Monday stormed the Lagos State House of Assembly protesting non-payment of their salary arrears by the state government.

According to The News Agency of Nigeria (NAN), the sweepers were protesting the non-payment of five months salary by the authority.

They carried placards with various inscriptions such as “We deserve to be paid for our toiling”; “Life is now difficult, save us from poverty”, among others. They urged the state lawmakers to intervene in order to alleviate the economic hardship they were experiencing.

One of the sweepers, identified by Vanguard as Mrs Yemisi Oresanwo, noted that life had become difficult for her and her family since the workers were transferred from the Ministry of the Environment (MOE) to LAWMA.

Oresanwo, who is a supervisor for Ikeja zone, explained that sweepers received N12,000 while supervisors collected N20,000 monthly.

“I am being owed five months while others are also being owed between three and four months salary.

“So we want government to come to our aid.

“Since we were transferred from MOE to LAWMA, the latter has been responsible for payment of our salaries until recently when they refused to pay us.

“LAWMA has been paying its own workers but has neglected us,” she said.

Also speaking, Mr Abidemi Najeem, representing Jibowu-Fadeyi zone of the sweepers, said that the sweepers could no longer bare the hardship arising from non-payment of their salary.

“Schools will resume this month and we anticipate further hardship as we may not be able to pay our children’s school fees, if this situation continues.

“We are also expecting Ileya festival (Eid-Ul-Kabir); how do they expect us to take care of ourselves and family members?” he queried.

He, therefore urged the state government to clarify the ambiguity about whether the sweepers were under LAWMA or MOE.