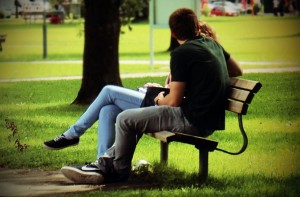 Police in Taiwan, were called after 2 men fought over a woman. Police in New Taipei City, said that a woman, who was identified as Fangs, called police after her lover showed up at her home and demanded her husband share her.

Fangs had been married for several years and has two young children. When the couple began suffering financial difficulties, the two argued frequently.

According to Scoop, after a particularly bad argument, Fangs began to confide in her 30-year-old neighbor who was identified as Wang. Wang fell in love with the 28-year-old woman even though she is married to another man. One night, after arguing with her husband again, Fangs went to a bar, where they were drinking until late at night. The two then had sex.  When Fangs awoke in the morning, she regretted her actions, and returned home to her husband and children.

She confessed to her husband about her affair and the couple decided to work on their marriage. They began seeing a marriage counselor. Wang was less than thrilled that Fangs had decided to return to her husband. One night, Wang got drunk and decided to confront his lover’s husband. He threatened the husband with a knife and demanded to share his wife.  The two men began to fight and Fangs called the police.

Both men agreed not to press charges as long as Wang promised to leave the Fangs alone. Wang accused the husband of being greedy for not wanting to share his wife for one week.