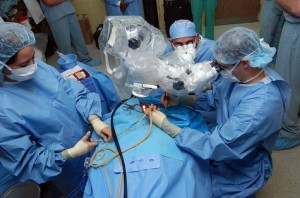 A man became extremely angry and depressed after going under the knife for a nose job, police in Russia said. St. Petersburg police said that 34-year-old Yury Lebedev, shot and killed Alexander Remizov, in his office at the Russian Railways Hospital on Monday.

According to the police investigation, Lebedev was unhappy with his nose after undergoing a procedure to correct it.

Lebedev also underwent a procedure to correct his ears.

Lebedev shot the doctor in the chest with a hunting rifle. He managed to sneak the gun into the hospital through metal detectors as they had been disconnected. Lebedev struggled to have a long term relationship and he blamed it on his poor appearance. The last thing Remizov told Lebedev is that he should see a psychiatrist.