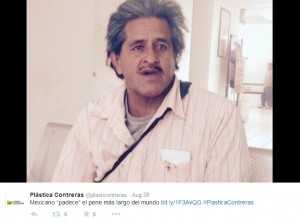 A man in Mexico, who always thought that bigger is better, is very disappointed as women run away from him as soon as they see his long manhood.

He also filed a petition with city officials to be recognized as disabled, saying that his long manhood is keeping him from having a normal job. To satisfy the Guinness Book of Records, Cabrera underwent a medical examination and had an x-ray done of his organ.

Doctors who examined Cabrera, said that he has a lot of hanging skin. Cabrera does not have a girlfriend, as women freak out as soon as they see him naked. Doctors recommended that Cabrera undergo a reduction operation.