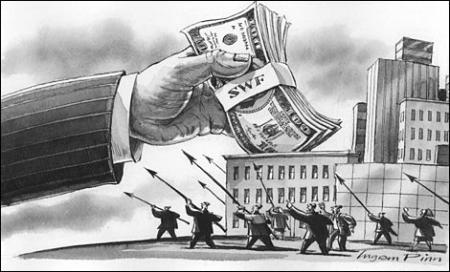 Edo State Governor and Chairman of the National Economic Council (NEC) Ad-hoc Committee on the management of the Excess Crude Account (ECA) and related federation accounts issues, Comrade Adams Oshiomhole says the Managers of the Sovereign Wealth Fund (SWF) could not account for $700 million out of the $1billion contributed for the fund.

Speaking to State House Correspondents at the Presidential Villa after a meeting with Vice President Yemi Osinbajo on Thursday night, Oshiomole claimed that records made available to his committee showed that only $300 million was left in the fund.

Oshiomhole disclosed that the report submitted to his committee only reflected $300 million with the explanation that the money had been invested in the Second Niger Bridge and Abuja-Kaduna rail.

However, he pointed out that the former Finance Minister, Dr. Ngozi Okonjo-Iweala, had earlier told the world that the Abuja-Kaduna rail was financed by a Chinese loan.

“We have it in black and white and I can publish it if anybody wants to deny that because it was not submitted to me secretly. It was submitted at plenary of the committee.

“And then we asked, because I knew that the fund was $1 billion, what was done with $700 million. And they said they have made some investments.

“We asked them what they invested in and they said the Second Niger Bridge and partially in Kaduna-Abuja rail. That is what they said and I was not alone there. We were about five governors and it was a full plenary.

“But we know that the Kaduna-Abuja rail was funded with Chinese loan, which even Mrs. Okonjo-Iweala spoke about, when they said the loan from China was not used for Lagos, she said it was for Kaduna-Abuja,” Oshiomole said.