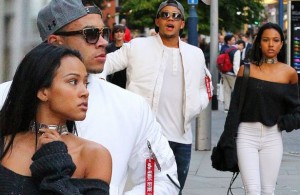 With tons of guys chasing after Chris Brown’s former lover, Karrueche has decided to go after a guy that chases a ball for a living.

The model/actress was spotted in Los Angeles on Monday as she went shopping with Manchester United player Memphis Depay in the city.

The 27-year-old spent a whole 3 hours at the Manchester Selfridges with the Dutch footballer, who looked pretty happy about being out with Chris Brown’s ex-girlfriend.

Kae and Depay – who made a £25 million move to Manchester United this summer – looked coy as they headed down the street, making sure they didn’t stand too close together.