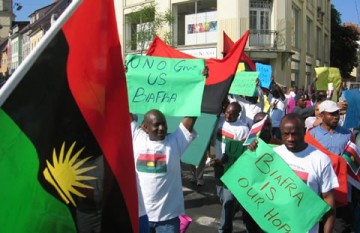 The Movement for the Actualization of the Sovereign State of Biafra (MASSOB), says it has uncovered plans by security operatives to embark on extra judicial killing of its members.
The Anambra North Coordinator of MASSOB, Emmanuel Omenka, made the disclosure yesterday while briefing newsmen.
According to Omenka, the plot became rife immediately after the release of 48 members arrested during the celebration of the 16th anniversary of the existence of the movement.
The Anambra coordinator, who is also the Personal Assistant to MAS¬SOB leader, Chief Ralph Uwazuruike, said “the security operatives, especially the police were annoyed that the Umuahia court granted 48 detained members bail and now plan to kill us in the night or any time they arrest our members since the court has disappointed them by not jailing those arrested during the celebration of our 16 years of existence”.
Flanked by the Director of Information of MASSOB, Charles Igbokwe at the press briefing, Omenka revealed that out of the 48 released members, 42 were arrested from Anambra state while six were from Imo state.
He said, “We are still looking for the whereabouts of one member, Christopher Nwafor who was wearing MASSOB uniform during the celebration day. The police should tell us his whereabouts”.