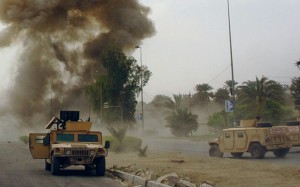 Security forces in Egypt have mistakenly killed 12 people, including Mexican tourists, during an anti-terror operation, the interior ministry says. The tourists were travelling in four vehicles that entered a restricted zone in the Wahat area of the Western Desert, the ministry said. BBC was there:

Ten Mexicans and Egyptians were also injured and are being treated in a local hospital. Egypt has been battling Islamist militants for years.

Attacks on army and police, mainly in the Sinai peninsula, have escalated since Islamist President Mohammed Morsi was ousted in 2013. Mexico’s President Enrique Pena Nieto condemned the incident and said he had “demanded an exhaustive investigation by the Egyptian government”.

The Mexican foreign ministry confirmed that at least two of its nationals had been killed and said it was working to confirm the identities of the other victims. In a statement, it said Mexico’s ambassador in Egypt had visited the local hospital and spoken to five Mexicans who were in a stable condition.