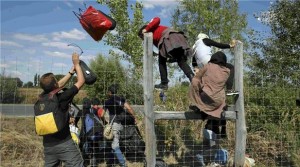 European Commission President Jean-Claude Juncker has called on EU countries to agree by next week to share 160,000 refugees, as thousands continued to stream across European borders, fleeing from war and persecution. Aljazeera reports:

In an impassioned appeal on Wednesday at the European Parliament in Strasbourg, France, Juncker unveiled a list of new proposals to help Europe confront its biggest refugee crisis since World War II.

The plan, which will see Germany and France take in the lion’s share of refugees, is likely to run into serious resistance from some member states. Juncker warned that Greece, Italy and Hungary, where most of the refugees are currently camped out, can no longer cope alone.

“It is time for bold, determined action by the European Union,” Juncker told EU lawmakers, noting that some 500,000 migrants have entered Europe this year, many from conflict-torn Syria and Libya. In his proposal, Juncker wants 22 of the member states to accept another 120,000 people, on top of the 40,000 already agreed upon in June, bringing the total number to 160,000.

Man Detained For Taking Girlfriend’s Exams While Dressed As Woman