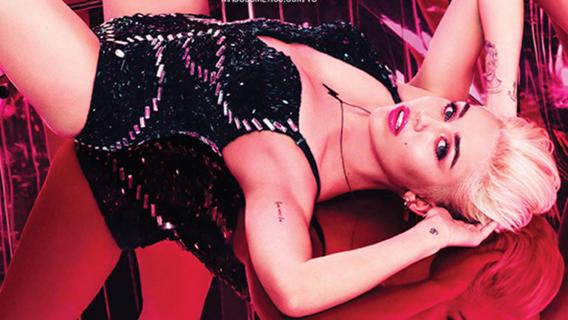 Advertising watchdogs have cleared a poster featuring the pop star and actress of allegations it was overtly [email protected] and offensive. The billboard featured Miley Cyrus wearing a low cut bodysuit lying on her back with her legs apart against a mirrored wall looking into the camera.

Another version of the poster, which was promoting the ‘Viva Glam’ make-up range for MAC, used a similar image and partially showed a reflection of her crotch in a mirror.
The Advertising Standards Authority (ASA) received complaints from just three members of the public, who said the image was overtly [email protected] and therefore offensive.
Two people said the image was unsuitable for a poster than was likely to be seen by children.
The singer has built an image based around shock and [email protected], often wearing very little in her own publicity pictures and at awards ceremonies in order to boost her notoriety, profile and sales.
But, the ASA has ruled that this particular image did not go too far and there was no good reason to ban it.
Source: Linda Ikeji Blog