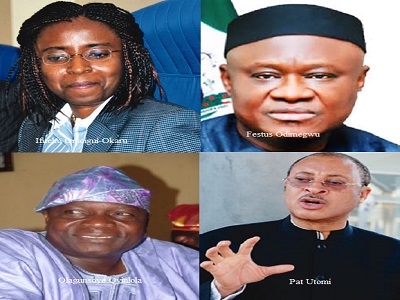 If a report by the PUNCH newspaper is to be believed, we might just have gotten a glimpse into the ministerial list submitted by President Muhammadu Buhari to the Department of State Service, DSS, for screening.

According to the report, a former Managing Director of Nigerian Breweries Limited, Odimegwu Festus Odimegwu; renowned economist, Prof. Pat Utomi; former Governor of Osun State, Olagunsoye Oyinlola; and a human rights activist, Femi Falana (SAN) are among the ministerial nominees that have been screened by the DSS.

The report also confirmed that a former Chief of Army Staff, Lt.-Gen. Abdulrahman Dambazu (retd.); the immediate past chief executive of the Federal Inland Revenue, Mrs. Ifueko Omoigui-Okaru; a former finance commissioner in Lagos State, Mr. Wale Edun; and a former National Legal Adviser to the defunct Congress for Progressive Change, Abubakar Malami (SAN) are on the ministerial-nominees’ list.

It was learnt that some of the nominees had appeared before the DSS but none of them confirmed that they had been screened by the DSS.

It was further learnt that they had been instructed not to leak details of their screening to the media.

“What was done was not physical screening but mainly background checking”, one of the already-screened nominees told the newspaper late on Sunday.