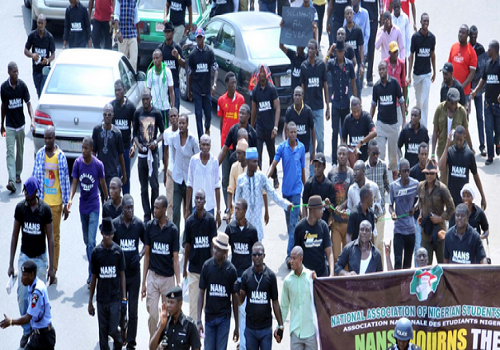 The National Association of Nigerian Students, NANS, South-West zone, has distanced itself from the position of its national president on the trial of the Senate President, Bukola Saraki.

The NANS President, Tijani Sheu, and some groups headed by the Director-General of Heritage Centre, Katch Ononuju, had on Saturday in Abuja threatened to lead mass protests to embassies in Abuja over what they termed the political victimization of Mr. Saraki.

The pro-Saraki coalition also accused the Presidency of complicity in the travails of Mr. Saraki, insisting that the Senate president’s disregard for the directive of the All Progressives Congress, APC, in respect of National Assembly leadership tussle, was the root of his trial.

But the south-west NANS, Zone D, dismissed the position of its national leadership, insisting that the rule of law must take its course and urged Mr. Saraki to submit himself for trial.
Speaking on behalf of the pro-Saraki group on Saturday night, Mr. Ononuju said:‎ “Buhari lacks the political will to fight corruption. We are very worried with the ‎turn of things.

“The action by the Senate to appoint its own leadership is the reason behind this witch-hunt. Accidents have been arranged for senators who supported Saraki. DSS have been used to trail senators. The current CCB should not exist. The current leadership came into office in 2010 and their tenure ought to have elapsed in April.

“The power that seeks to undermine our democracy and the Senate is gaining the upper hand. I want corruption to be fought, but we do not want a return to the days of Olusegun Obasanjo where arrests were targeted. The president makes appointments and does not refer them to the Senate for confirmation because he does not like the leadership there.

However, NANS Zone D, in a statement on Sunday by its coordinator, Okikiola Ogunsola, said “NANS as a body” had recently pledged its support for the president’s fight against corruption.

Earlier on September 2, the NANS President, Mr. Sheu, led students to Aso Rock Villa to pledge the support of Nigerian students to the current administration, particularly its anti-corruption drive.

But the NANS Zone D said “Our position is that any individual or group charged or alleged to have participated directly or indirectly in misappropriation, mismanagement or acquired properties in a wrong way should submit to rule of law to take effect”.

Ogunsola added that though the zone had respect for the national body; yet, as “an ideological zone, we would not in any way subject ourselves to any act by our national body that tend to undermine or coerce rule of law from taking its course”.

“We are stating in strong terms that our zone is not of the planned protest by the civil society group under the aegis of Heritage Group and NANS”, it said.