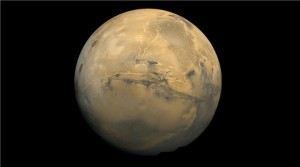 NASA will announce on Monday that liquid saltwater exists on the surface of Mars – a discovery that scientists say indicates the “potential” for life on the planet. The historic findings by scientists from NASA and several US universities are based on research on dark, narrow and elongated streaks that appear on the surface of the Red Planet and which are known as “recurring slope lineae” (RSL). Aljazeera reports:

Research shows the streaks “appear and grow incrementally in the downslope direction during warm seasons”. NASA scientists suggest the streaks were formed as a result of salty “flows” or “seeps” because they bear a striking resemblance to the shapes and curves that water on Earth makes as it flows along the surface of the ground.

The theory that water exists on Mars was first proposed by scientist Lujendra Ojha, who as an undergraduate student at the University of Arizona in 2011, studied dark, finger-shaped images on Mars. Ojah, now a PhD candidate at the Georgia Institute of Technology and the lead author of the study, told Al Jazeera that “water does exist on Mars”.

Ojah added that chemical signatures of water were found in the crystals of salt samples. “We found evidence of water activity in hydrated salts on Mars,” he said. The authors of the research paper – “Spectral Evidence for Hydrated Salts in Recurring Slope Linea on Mars” – published in the scientific journal Nature Geoscience identified four key hydrated salts that indicated the presence of water: magnesium perchlorate, magnesium, chlorate, and sodium perchlorate as present in the dark streaks.