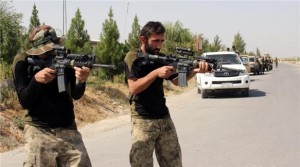 The US has conducted several air strikes with the state goal of protecting coalition troops at the airport near the key northern city of Kunduz as Afghan forces continue to battle Taliban to retake it. NATO special forces have also reached Kunduz to also bolster Afghan troops after the Taliban seized the strategic city, the military coalition said on Wednesday. Aljazeera reports:

“Coalition special forces are on the ground in Kunduz advising their Afghan counterparts,” a NATO spokesman said.

The forces comprise US, British and German troops, a Western military source told AFP news agency on condition of anonymity, without specifying the number. Heavy fighting raged inside Kunduz for a third day on Wednesday as government forces, backed by US air strikes, battled Taliban fighters who had scored one of their biggest successes in 14 years of war.

“The US conducted several air strikes in the vicinity of Kunduz airport between approximately 11:30 pm September 29th and 1:30 am September 30th against individuals threatening the force,” US Army Colonel Brian Tribus said.

Pentagon officials say the air strikes are being conducted under the rules of engagements for the NATO support mission Resolute Support which authorises air strikes to protect coalition forces on the ground, but not offensive strikes to support Afghan troops.