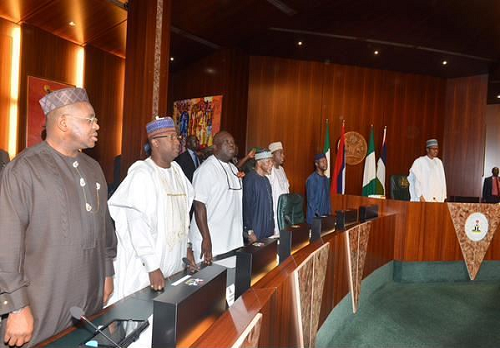 Another round of financial lifeline is to be enjoyed by states following the Federal Government’s decision to share N535.5 billion – being reimbursement of the cash spent on maintaining federal roads across the country.

The decision was taken at yesterday’s National Economic Council (NEC) meeting presided over by Vice President Yemi Osinbajo at the State House, Abuja.

Governor of Oyo State, Senator Abiola Ajimobi, disclosed this to State House correspondents at the end of the meeting on Thursday.

He was accompanied to the briefing by his Kano, Benue and Delta counterparts – Abdullahi Ganduje, Samuel Ortom and Ifeanyi Okowa respectively.

Ajimobi said: “Another issue discussed is on refund of expenses incurred on repair of federal roads by states. As listed here, we have 13 states that have fully complied with the reimbursements requirements, we have eight states that have partially complied, 21 states without compliance and the total sum of claims to be reimbursed is exactly 535, 596, 386, in other words, N535.5 billion”.

According to the Oyo governor, N13 billion has been disbursed to states as at 2013 and that the challenges faced had to do with inadequate funding in the ministry.

He also disclosed that 26 state governments have applied for restructuring of their bank loans amounting to N500 billion.

While 11 of the states have concluded and submitted all relevant documents, Ajimobi disclosed that 13 states are involved in the second phase that will commence soon.

According to him, the Accountant General of the Federation told the Council that the Excess Crude proceeds balance was over $2.257 billion as at 15th September.

He also said that council was informed that fertilizer used by farmers increased by over 271 per cent towards food security in the country.

He said: “Lastly, we discussed the issues of the current and future agricultural policy direction. And the Permanent Secretary made a very lucid presentation and it was extensively discussed and he gave us information on data base of farmers in proceeds production capacity of food storage and grains increased fertilizer.

“And he told us specifically that fertilizer used by farmers increased by over 271 percent which was commendable, but the conclusion was that there was the need for more interaction with the states and local governments and their approach in agriculture should be bottom-top approach”.

The governor said that Council was also briefed about the planned agricultural training programme that the ministry of agriculture intends to pursue, adding that 12 states and FCT have been selected for the pilot phase.

The second phase, he said, first phase, would include non-educated youths to be spread across states by geopolitical zones.