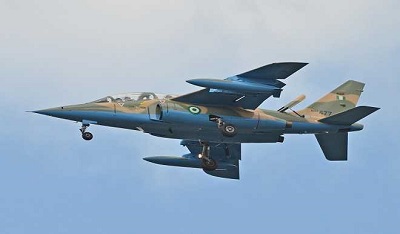 The Nigerian Air Force said Wednesday that it has struck and destroyed solar panels believed to have been used by Boko Haram terrorists for electricity in Sambisa forest.

He said the attack was carried out during the recent take-over of Gamboru-Ngala by government troops.
Gamboru-Ngala, said to be a “strategic economic town” in Borno State, was retaken from Boko Haram insurgents by troops of the Nigerian military on Tuesday.

“The most recent success was the attack on BHT [Boko Haram Terrorists] targets in Ngoshe and Pulka by the Alpha Jets providing Close Air Support to own ground forces”, Mr. Alonge said.

The NAF spokesperson noted that the attack was aimed at decimating the capability and resolve of the members of the sect.